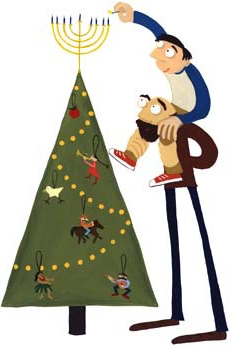 With “the holiday season” now upon us, I thought it would be appropriate to share a few thoughts with you about Chanukah, the Jewish Feast of Dedication.

Personally, I’m not a big fan of typical Chanukah observances for one simple reason—we tend to let them steal God’s thunder, so to speak. How do we do this? By affording Chanukah equal (or greater) attention with Adonai’s Feasts and appointed times, and by using it as a replacement for Christmas.

So many of us—after deciding that Christianity in all forms is “pagan” and “evil”—run screaming from the church’s religious clutches, only to impose our residual sense of religiosity upon “the right and true way” to live for God. Chanukah, then, becomes another casualty of our religious metamorphosis, as we swap out one over-hyped Christian holiday for a Jewish one. But just because Chanukah is mentioned as a passing detail in Yochanan (John) 10:22, that doesn’t give us permission to appropriate Chanukah for our own “Messianic” needs or agendas. The fact of the matter is, unlike the Feasts and appointed times designated by Adonai Himself, Chanukah is a man-made, Jewish holiday—and we only make it more so when we heap upon it the traditions and theologies of our own making.

When I used to celebrate Chanukah as a child, it held virtually no meaning for me—it was simply the Jewish alternative to Christmas (man, were the neighbor’s parents mad when I told my friends there was no such thing as Santa Claus!). As an adult, having been found by Messiah and reintroduced to my Jewishness, Chanukah had new significance for me—seeing Yeshua as the chanukiyah’s Shamash, the Light of the World, etc. But as I began to mature in my understanding of Judaism, the Torah, and the Messianic faith, I realized that such an approach to Chanukah—while symbolically beautiful and soulishly satisfying—is unjustified. It is simply an innovative synthesis of Christmas and Jewish tradition, without any Scriptural backing whatsoever.

And yet, there it is: Chanukah—an icon of modern, Jewish identity; an unavoidable fact of today’s Jewish consciousness. Should we as Messiah’s disciples simply perpetuate the myths and superficial message of the traditional (or “messianized”) Chanukah story? Or should we do justice to the people and events in whose memory the feast was decreed? Do we extrapolate from the Chanukah tale a Scripturally-unfounded message of Messianic hope—inspiring though it may be? Or do we find fuel for the fire of our lives as zealous, uncompromising, sold-out disciples of Yeshua? Unfortunately, the only fuel most of us will hear about this Chanukah is the legendary Temple oil that burned miraculously for eight days. But the real story of Chanukah tells of an unquenchable zeal for Adonai that all disciples of Messiah would do well to emulate and admire.

The lament of Yir’m’yahu (Jeremiah) 20:8-9 foretells the spirit that is at the heart of the real story of Chanukah:

“When as often as I speak, I cry out, ‘Violence!’—and ‘Destruction!’ I proclaim. So the word of Adonai has been to me [cause] for [my] shame and ridicule all the day. But [if] I said, ‘I will not mention [Adonai], nor will I speak anymore in His Name,’ then [His word] will be in my heart as a burning fire shut up in my bones; and I will be weary of containing [it—indeed], I am not able.”

This winter season—whether we are celebrating Chanukah, Christmas, or no special holiday at all—may we all be consumed… not by our own unyielding opinions, religious needs, or misperceptions about who we are in Messiah, but by a burning and relentless devotion to serve Adonai and others above our own needs, desires and intellectual spirituality. I encourage you to learn about the actual account of the Maccabees and their unwavering dedication to Adonai. It’s time to put aside the fairy tales of our youth, and instead embrace the raw, untamed passion that is required to follow Messiah… and light up the world.