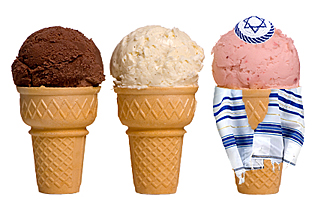 I recently witnessed a Jewish believer in Yeshua trying to concisely describe Messianic Judaism to a roomful of Christians.  Now, I completely understand and can relate to the challenges a speaker faces when he needs to close the frame of reference gap and establish rapport with his audience. So I empathize with this man and the monumental task he set out to accomplish.

But this does not change the fact that I was completely mortified by the explanation that came stumbling forth.  I can only hope that the words employed came out of nervousness or ill-preparedness, but alas, Messianic Judaism was forever characterized for these Christians as “Church… with a Jewish flavor.”  If we are nothing more than “church” with a kippah—or a synagogue with Yeshua on top, for that matter—we have failed in our mission, and utterly lost our way.

Is this all we are?  “Church with a Jewish flavor”?  I imagine this is exactly how Judaism sees us—nothing but Christian missionaries and confused, “former” Jews who pop kippot on our heads, wrap tallits around our shoulders, chant Hebrew prayers we are barely able to understand, and think this makes us Jewish (or, at least, appear to be so).  Yes, some of us are deathly sincere about the way we practice our Judaismishness,* but if we are defined by worship services, pulpits, sermons, rituals, praxis and programs, we’re just another flavor on the menu of faith, promising only to excite the palate of the spiritually and intellectually unsatisfied.

Should Christians feel at home in our worship services?  Should Jews be comforted by our utilization of tradition?  If our only distinction from the next religious movement is a mere repackaging or resynthesizing of others’ doctrines, values and practices, then there is ultimately no difference at all—yet, we are indeed meant to distinguish ourselves!  Jews will not be placated because we know our way around the institution of our fathers, and thinking Christians will not esteem us because we appear to demonstrate a more authentic faith.  Our default position needs to change—who we are at our core needs to be demolished and completely rebuilt.  As Messianic Jews, we must not rest on the foundations of Judaism, Christianity, or a monstrous concoction of both.  Only the Torah, through Messiah, can define our identity as Jews; only the Scriptures can describe why we exist, what we believe, and who we stand for.

Messianic Jews: who are we?  Jewish-flavored church?  Christian-seasoned synagogue?  Rather, may we be the savor of pungence and putrescence in the mouths of the religious—on the tongue of the unsaved: an indescribable delight.  When we are asked to explain how “Messianic Judaism” tastes, may all our words fail, as we instead offer the hungry a bite.

* “Judaismishness,” a “Geoffrey-ism”, refers to that which is usually considered “Jewish” and allegedly portrays “Jewishness,” but is more accurately just a product of Judaism or Jewish culture (i.e., kippot, tallitot, synagogues, b’rachot, torah scrolls, etc.).  Since that which is “Judaismish” is subjective and specific to a given Jewish denomination or community, I feel that “Jewish” requires a more universal definition that is limited to absolutes like ethnicity, heritage, lineage, and birthright.  I, therefore, am Jewish because I was born this way and continue to keep the Torah, follow the Messiah, and identify myself and my family as Jewish—not because I wear the costumes or engage in the traditions of a Judaism.  Jewishness is internal; Judaismishness, external.  This is not to say that Judaismishness is bad in all manner and form—only that no amount of it can create, enhance, temper or abolish one’s God-given Jewishness.