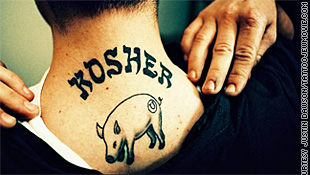 “A blogger writes about how one of Judaism’s holiest days ended, for her, in a strip club, while elsewhere a guy strolls into a tattoo parlor requesting a Star of David. Two women exchange wedding vows in a Jewish ceremony, and hipsters toss back bottles of HE’BREW, The Chosen Beer…. [Moses] couldn’t have seen these Jews coming.”

This is how a recent article begins, showcasing the so-called “New Jews” and the ways they express their Jewishness: with flagrant violation of Torah, and a heart ablaze for assimilation.  They are “making [Judaism] and its culture work for them and others in a time when, more than ever, affiliation is a choice.”  It’s an astute observation by Ms. Ravitz (the article’s author), and one that should make us shudder:  it’s happening again—as it has continually since the beginning—Jews choosing… as if we had a choice.

The Scriptures testify against us:

And the real story of Chanukah begins with our willful assimilation, when…

Since the beginning, we have been choosing for ourselves, following our own lusts, desires and fears… and every time, we have made the wrong choice.

As heart-wrenching as it is to admit, there is nothing “new” about the “New Jews”—they are only the most current evidence that Israel is continuing to choose the ways of the nations and the flesh over the ways of Adonai.  Perhaps not every Jew is a gay, drunken, tattooed voyeur… but that doesn’t mean we are not complete degenerates, constantly in search of new ways to please and comfort ourselves in a world that dares us to be different. No, for the Jew—indeed, for every disciple of Messiah—there is but one true choice: follow Adonai, and revile assimilation… be different, or die.

Though the real story of Chanukah begins with the lament for Israel’s infidelity, it thankfully ends with a message of hope: a few faithful ones can lead the way to restoration.  Now, more than ever, we need to set aside our fears and the temptations of the flesh, and follow only the politically incorrect ways of our Master.  May we refuse to fit in, and instead stand out and influence our people and the nations around us.  Let us boldly proclaim the message of turning away from ourselves, and choosing only to run after Him who grants everything we were ever truly after.

“I have caused to testify against you today the heavens and the earth; life and death I have set before you, the blessing and the cursing. So you: choose life—so that you will live; you and your seed—to love Adonai your God, to listen to His voice, and to cling to Him (for He is your life, and the length of your days)…” D’variym (Deuteronomy) 30:19-20