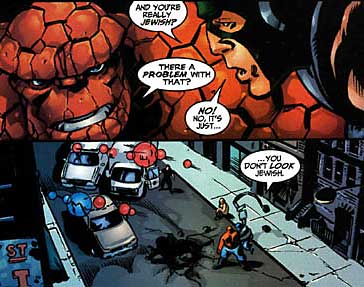 Lindsey Miller laments about Pesach in Spain in her recent article, “The Brightest Star.”  While schooling in Sevilla, she was unable to find a Passover celebration amidst the overwhemingly Catholic city, and instead found herself ogling the magnificent display of Domingo de la Resurreccion—the local celebration of Easter.  One of the things she noted about the people of Sevilla was that despite their Catholic affiliation and religious expression, far less than the majority actually believe in God.  This was, of course, a point of disconnect for her.

Ms. Miller’s most profound observation and conclusion, however, was as follows:

“… Spain possesses a religious unity that the United States lacks.  We do not have those unifying characteristics like a common hair color, face shape or type of cuisine.  In Spain, everyone has the same thick, dark-haired look: not I….  Now, back in the U.S., I feel so at home in part because of the diversity—I’m able to blend in….  But it’s more than that.  In Spain, religion is intricately interwoven with the Spanish way of life: there is no separation.  Here, perhaps because we’re allowed the luxury of deciding how and to what extent we want to celebrate our religion, the opposite is true.  We can separate it as much or as little as we want.”

The freedom of religion that Ms. Miller esteems as an American value is a freedom that the God of Israel never intended for Jewish people to have.  Though Jews thrive as individuals, especially among the nations of the West, Adonai has not given us permission to be Buddhists, Hindus, or even Christians.  Though our banishment to the four corners of the earth for our disloyalty and disobedience has naturally amplified our rejection of God, we have not been granted the inalienable right to follow (or not to follow) the gods we choose.  The culture of the United States of America may tell us it’s okay to separate our “religion” from our way of life, but the Jew misses his entire reason for living when such a separation takes place.

Our faith—as laid out for us in the Torah and all the Scriptures of Israel, and brought to its fullness in the Messiah Yeshua—is not optional.  On the contrary, it is our responsibility and duty to the nations in which we now dwell to abhor self-assimilation and to be shining representatives of the God and Messiah of Israel.  The more comfortable we are among the people groups of the world, the further we are from who God has called us to be.  Our only hope to return from dispersion is to turn from the desire to be seamlessly incorporated into the fabric of the nations.  We have been chosen and called out to head up the reconciliation of the nations to their Creator—but we can’t fulfill this call, led by our King, Yeshua, if we’re merely just part of the crowd.

Ms. Miller begins to wrap up her thoughts in saying,

“As I watched the passing float of Jesus ascending to heaven that day at the parade… there was so much pomp, ritual, symbolism, so much outward display of religion.  And this, I realized when I returned to the States, is not what I need.”

Lindsey, you are so right.  We don’t need outward religious expression to fulfill our calling as Jews.  We need to mourn that our unique people-hood is lost in the sea of Diaspora, then to turn back to God and begin to shine His light in spite of our unfavorable condition.  As Jews, we are not called to blend in among the nations, but to stand up and stand out—to enter into the fullness of our destiny by the light of the brightest star of all… Israel’s favorite Son, our brother, Yeshua HaMashiach.